Qigong For Health - The New Science Behind Ancient Practices [Part 1]

The Science Behind Qigong & Pranayama

The old masters discovered centuries ago, that deep breathing practices like qigong and pranayama lead to long life and abundant health. I teach several of these traditional qigong sets as part of our local martial arts classes here in Tempe, AZ including a variation of yijinjing unique to I Liq Chuan, as well as a qigong for health set taught by GM Sam Chin, and the “five contemplations of breathing” taught by Venerable Jiru of the Mid-America Buddhist Association.

A new review article recently published in Frontiers in Psychiatry [1] reveals some of the mechanisms behind such practices, as well as their applications in treating both mental and physical disorders like anxiety, depression, inflammatory bowel disease (IBD) and Crohn's disease.

At over 15 pages, and full of scientific jargon, the original review paper is quite long and dense for many readers, so I will summarize some of the more important details below. Even as a summary, I’m going to break this post up into multiple parts: 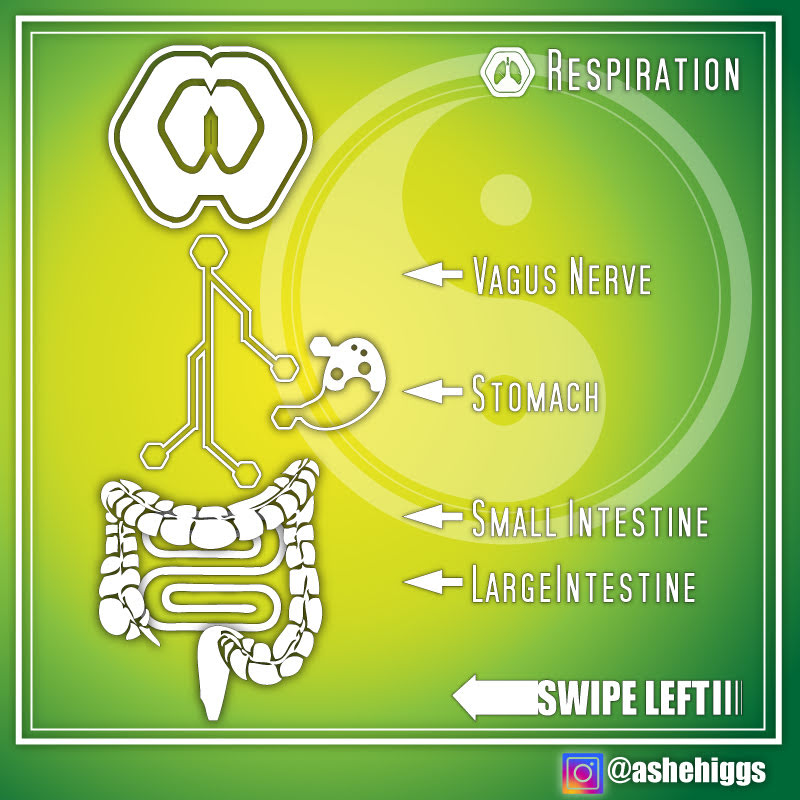 
The human gut has an estimated 100-500 million neurons. This is more neurons than the spine, and is the largest accumulation of nerve cells in the human body, and is often referred to as “the second brain”, but is more properly referred to as the enteric nervous system. Well known author of martial arts and qigong books, Yang, Jwing Ming has been writing about this since at least the 90’s.

The enteric nervous system produces more than 30 different neurotransmitters and communicates directly with the brain (and vice versa) via the vagus nerve. The vagus nerve originates in the brain stem, and extends downward through the torso connecting to all the major organs, including the brain, heart, liver, lungs and the gut. Due to the nature of its length and complexity, it’s called “the wandering nerve” (vagus means wander in Latin).


This “two lane highway” between gut and brain via the vagus nerve is referred to as the gut brain axis, or GBA.

From an “Eastern” point of view, the body tissues can be divided into yin and yang types like flexors and extensors in the muscles, or arteries and veins in the circulatory system. Nerves are similarly divided into two different fiber types: afferent (long “A” like hay) and efferent (long “E” like feel) fibers. 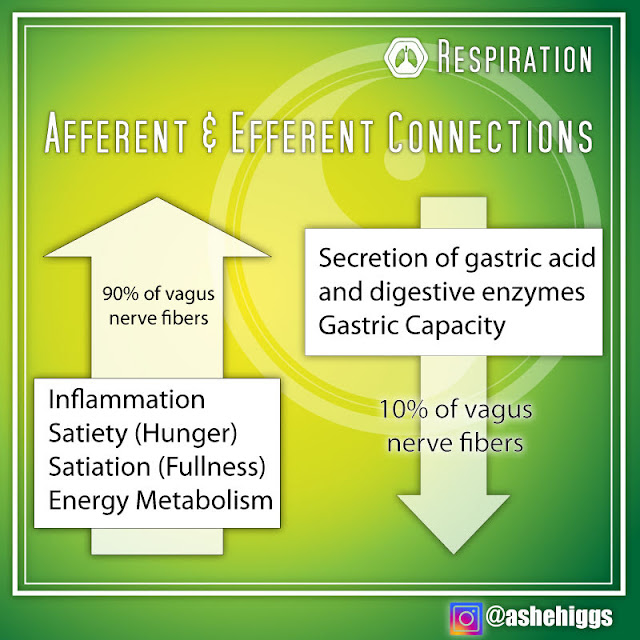 In the vagus nerve, a whopping 90% of the nerve fibers are afferent fibers, bringing detailed information about the gut, and the state of its internal environment back to the brain, then to brain stem and limbic system (more on this later), while the remaining 10% of fibers are efferent, communicating information about our external environment and mental state back to the gut. This intimate connection explains why you feel moody when you’ve eaten the wrong foods, or why you get butterflies in your stomach when you get nervous.


How It Works - Respiration

So that you don’t forget to do important things like breathe, say, after you fall asleep, by default, respiration (breathing) is hardwired into the autonomic nervous system. However, being able to voluntarily speed up, or slow down our breathing is an ability we all possess. (As a side note, I recently heard about a condition in which people lose the autonomic function, and basically can't sleep anymore. Every time they try to fall asleep, they wake up because they quit breathing, and eventually die of sleep deprivation!)

As you may have guessed by now, breathing practices can directly stimulate the vagus nerve, by increasing the vagal tone, leading to an improvement of autonomic regulation, clarity of thought, improved mood and ability to cope with stress.

Good heart rate variability indicates that you're in a relaxed state, whereas poor variability indicates a stressed, sympathetic state. So by slowing down the number of breaths we take in a minute, and focusing on making the exhale longer than the inhale, we naturally cause the heart rate to drop, which restores vagal tone, and increases relaxation as we shift from a sympathetic, into a more parasympathetic state. Once in the parasypmathetic state, the gut then upregulates production of “feel good” neurotransmitters like serotonin, which go back to the brain, increasing relaxation and beginning a cascade that feeds forward into itself.

Although the effects of practicing various breathing techniques are at least initially global, masters of breath like Wim Hof have shown that conscious and direct, targeted increases in autonomic nervous functions like immune responses to pathogens like e. Coli can be achieved.[3]

Slow your breathing, heart rate drops, and the gut starts doing all kinds of things beneficial to our health. We can do all  this consciously because the forward, “thinky” brain is wired into the brain stem through the limbic system (the emotional center of the brain), which is in turn wired to the vagus nerve.

Part two will continue with how stimulating the vagus nerve through breathing exercises like qigong and pranayama help to regulate the immune system and improve blood pressure and gut health.

Email ThisBlogThis!Share to TwitterShare to FacebookShare to Pinterest
Labels: qigong

I'm in no doubt coming back again to read these articles and blogs.
for all treatment types