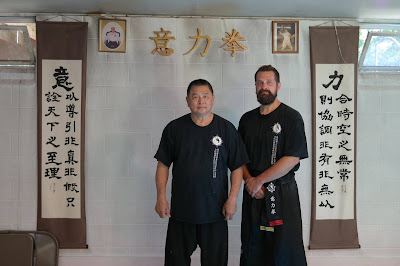 "I've been lucky to sit at the feet of one of the greatest masters of our time."
Originally from the rural farm lands of central New York State, Ashe moved to Arizona in 1998. He had a deep fascination with martial arts since childhood. "I always had an interest, there just weren't a lot of options."
Ashe's first taste of martial arts instruction came in the form of a brief membership in a Tae Kwon Do class held at the local YMCA. Although circumstances would prevent him from pursuing martial arts classes until later in life, a strong desire to learn would stay with him.
After moving to Arizona in 1998 the call to begin training in martial arts became too loud to ignore any longer.
"I started reading a lot of books to try and figure out what kind of martial art I wanted to learn. It wasn't until I read Yang, Jwing Mings books that I knew I wanted to learn an "internal" martial art. That's when I really started looking for a teacher, but after looking around at a lot of different places, I couldn't find anyone who impressed or inspired me."
Remembering the Chinese proverb that "it is better to spend three years looking for a good teacher than to spend three years learning from a poor one", he kept looking and hoping that "when the student was ready, the master would appear".
By chance Ashe happened to hear about a man named Chen, Ruey Tang who was giving a Tai Chi demonstration in downtown Phoenix as part of a celebration of Chinese new year.
"So I went to check him out. I had a lot of questions. I'm a fairly big guy and Ruey is half my size but he tossed me around fairly easily. I immediately knew this was something real."
Ashe continued to take classes under Ruey until December of 2002 when he officially retired from teaching. At that same time Master Sam FS Chin, his good friend and the man who taught Ruey I Liq Chuan came to Arizona for the first time.
"I was always in love with the idea of the enlightened warrior. When I met my Sifu, he was like something out of the movies. He had the whole package, wisdom and power. I was blown away. I had to learn everything I could from him."
With Ruey's blessing and encouragement Ashe became a distance student of Master Chin.
"The first few years were tough for sure. I didn't see my Sifu very often back then, but I just couldn't give up on something so amazing."
In 2005 Ashe received his Instructor Level 1 certificate from Master Chin and began his first classes, teaching in the parks around the valley.
In February of 2007, after years of dedication and effort a dream became reality when Master Sam FS Chin accepted Ashe as a personal disciple.
During that same year Ashe continued the tradition of proving the effectiveness of I Liq Chuan as a martial art by competing in full contact fighting tournaments. Since then he has won the following awards;