Scientists "Discover" What Martial Artists Have Known For Centuries...

A recent study by research scientists, documented the effects of “grunting” during the execution of a kick.  What did they find? The average study participant generated almost 10% more force when they “grunted”.[1] 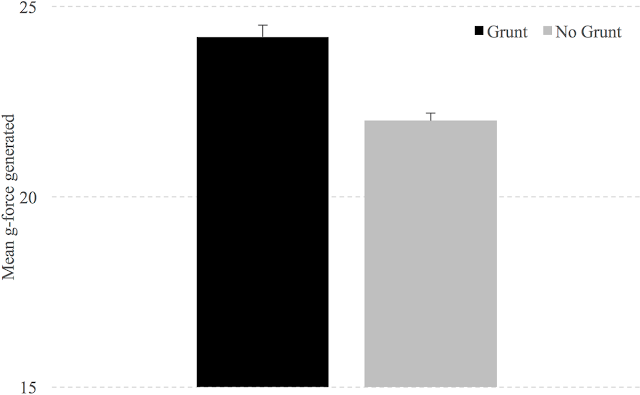 If you’ve trained martial arts for any length of time, this should come as no surprise. The old masters have known this for centuries.  In the Japanese arts, this phenomenon is referred to as kiai , or “spirit shout”, and in the Chinese arts, (i.e. kung fu), we train heng/ha 哼哈, and specifically in I Liq Chuan we also train tu’na 吐納 breathing. The shout helps to increase core stability which results in more power to the limbs. For example, in this study, researchers found that improving core stability of female handball players resulted in an increased throwing speed of almost 5%.

Stability is the foundation of power. Until you can control your center and connect to the ground, you cannot effectively generate good power and maintain balance. #MartialArts #TuesdayThoughts

While this might seem like a no brainer to experienced martial artists, the real secret lies in using the diaphragm. Most people are familiar with the diaphragm and its role in breathing, however what's less commonly understood is that the diaphragm plays a role as a respiratory muscle and a spinal stabilizer.

My experience has been that even dual role; as a respiratory muscle, and a spinal stabilizer. In my experience teaching my martial arts classes here in Tempe, Arizona, even veterans of martial arts and yoga often have extreme difficulty in accessing the diaphragm and have faulty breathing patterns. As a coach, I’ve had to get creative at times with finding novel ways of to get people in touch with their diaphragm.

RESPIRATION - Using the blow gun to help one of my students get a better feel for the diaphragm. The diaphragm has a dual role in the body, as a respiratory muscle and as a spinal stabilizer, which means the breath, and correct use of the diaphragm play a critical use in generating power. Most folks are pretty out of touch with their diaphragm these days, so using some extra tools can be both helpful, and fun! Respiration is one of the key principles I teach in all the people I work with. I'm a health, nutrition and martial arts coach. Make sure to go to my profile @ashehiggs for a link (http://bit.ly/2sGor97) to sign up for my FREE weekly newsletter and find your inner power💥✨! Classes held in Tempe, AZ and workshops worldwide. #respiration #concentration #ancientnaturewellness #martialartslife

More than meets the eye?

The secondary findings of the study are possibly more interesting; the audible noise made during exertion has the potential to confuse an opponent and cause them to misjudge their defense.

22 students from the University of Hawaii were tested on their ability to guess the angle of a recorded kick in the presence of a simulated grunt.

Although I think the methodology used in the second part of the study was problematic at best, the concept has merit.

Of course, this is martial arts, so if somebody didn’t take the concept to questionable extremes, it just wouldn’t be any fun, now would it?

With that being said, when my kids were young, I used to use the concept to interrupt bad behaviour by them without having to spank them. Keep in mind this isn’t just any ole yell, it comes from down deep, propelled by a powerful pulse of the diaphragm. There were occasions when my kids were taken enough by surprise that their young nervous systems were overwhelmed, and their legs actually buckled, causing them to fall down.  Of course, you can’t expect such an extreme response from a fully mature nervous system, but I have, on occasion seen grown men nearly cry in my local martial arts classes when I demonstrated by belting out out a powerful “ha” in their face (then again maybe it was just my breath…).

Going back to the study results, the students responded about 50ms slower to kicks that were accompanied by the simulated grunt. That’s about 1/20th of second slower to judge the angle of an incoming kick. Enough lag to potentially result in a KO kick, or in the old days, when swords or other weapons were involved, make the difference between life and death. 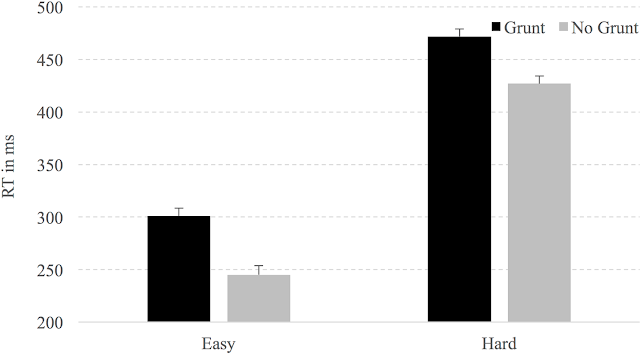