Email ThisBlogThis!Share to TwitterShare to FacebookShare to Pinterest
Labels: Shop

Part one of a new video series from our martial arts classes here in Tempe, Arizona; partner fajin training
.

If you'd like to find out more about our Tempe martial arts classes give us a call at 6027517003 or use the contact form above.

Falling Leaves Kung Fu is a licensed I Liq Chauan school in Tempe, AZ. We focus exclusively on I Liq Chuan, The Martial Art of Awareness.

If your in the East Valley area of Phoenix (Tempe, Mesa, Chandler) and would like to try out our martial arts classes, please call (602) 751-7003 take advantage of our new student offer!

Posted by ashe higgs at 9:44 AM No comments:

Email ThisBlogThis!Share to TwitterShare to FacebookShare to Pinterest
Labels: videos

This basically a re-post of some earlier clips I released some time ago, but I stumbled across a nice blog post by Tom Meyers, the so called "Father of Fascia", discussing some new insights into how the body creates and transmits force that go far beyond the simple "levers and pulleys" model of days past.

The particular insight which really caught my attention was the following quote;


Muscles transmit beyond their attachments via the fascial fabric to structures both proximal and distal. (Myers, Vleeming, Franklin-Miller, et al) 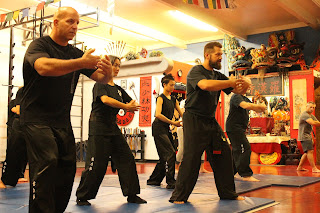 This statement should not be news to students of I Liq Chuan who have direct experience of creating and transferring force through the body structure via the "winding energy" we generate in the tissues.  Coming across the article was timely, as well as interesting, as we were discussing the use of the body tissue in class just last night.  When you learn to wrap the body there's both a personal effect and an interpersonal effect.

The personal effect is a change in the skin tone.  The skin get's tighter, the surface tension of the skin increases as you wrap more layers in the body.  It creates not only better engagement with the point of contact, but also some defensive energy.  The wrapping of many layers creates an effect similar to wearing many layers of clothing when it's cold out.  More layers means more protection, in this case from blows from your opponent.  The increase in surface tension prevents the power from the blows from penetrating to the inner layers of the body where they will do the most harm.  Traditional Chinese martial arts have various training methods for this kind of result and are often referred to as "golden bell" or "iron body" training.

Interpersonal-ly, the effect of the winding increases control over the opponent as you learn to extend the winding out from your own tissue and into your partners.  You essentially learn how to "grab" their skin with your own, and once you've grabbed it, you tighten it to establish what GM Sam Chin calls "the network".

Sifu says "Once you have the network, it's like a spider web, when anything changes, you know.  The line of tension that signals back to the center."

Posted by ashe higgs at 1:21 PM No comments: